Take This Hindsight As An Insight

Once you have chosen to take that step into the road to recovery, you will find that it has plenty of challenges you never thought you would ever come across.

She shares, “Make my hindsight your insight and save yourself the trouble and heartache I suffered.” 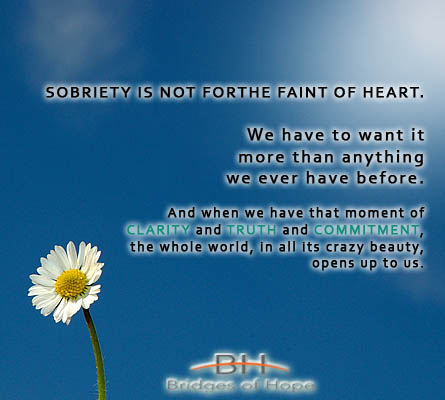 Let’s explore her story and maybe we can all learn from it:

Everything always makes more sense in retrospect. I know that as much as the next person. Even so, I cringe thinking about how much trouble and heartache I could have saved myself when I got sober if I had known then, what I know now.

Then again, part of the disease is lacking that rationale and slowly finding your way back. I had no desire to realize certain things right away, so I didn’t. Instead, I made my life a living hell for the first few months. Only as I started to slowly acknowledge these things did I find an inner peace of sorts.

1. It won’t always be easy. Even after 21 months of sobriety I still have “poor me” days. In fact, I started sobbing in front of my boyfriend a few days ago simply because I hate that I can’t handle alcohol like a normal person. In my experience, nothing even provokes these episodes. They just happen because every day cannot be simple. If every day was simple, then sobriety wouldn’t be so damn hard. But I’ve found that for every “poor me” day, there are 99 “lucky me” days.

2. Not everyone will approve or understand. I’ve been lucky in that most everyone in my life has been supportive. But still, there is always the occasional person who just doesn’t comprehend that I can’t have “just one.” Maybe they didn’t know me when I drank, or maybe they just don’t care. Either way, learning to say “no” in a sometimes-aggressive manner has been necessary. I’ve learned that people need to know where I stand, and it’s not up to them to pass judgment.

3. It always gets better. I was pretty convinced that life as I knew it was ending when I got sober. I didn’t think that I would ever be as happy as I was when I was using, or that life would ever seem as bright. But guess what? I still do everything I did pre-sobriety, minus the drinking. I even have fun while sober. (*gasp*)

4. Not everyone you lose is a loss. As with any lifestyle change, sobriety will affect friendships. While not everyone necessarily loses people, relationships will likely shift. I do wish I had known this, but I don’t think it would have mattered. If my new life choices don’t appeal to someone, then they likely weren’t in my life for the right reasons and their presence probably wasn’t beneficial. That doesn’t mean losing people can’t hurt, though. It certainly can.

5. It’s not weak to let people help you. I’ve always prided myself on being independent and able to solve most of what life throws at me on my own. I had an extremely negative view of admitting weaknesses and asking for help, so I rarely did so. This sums up the first month of recovery for me. I refused to let anyone in and chose to shut down when they tried. This became exhausting, and I realized it was a battle I wasn’t going to win on my own. I still struggle to ask for help, but it’s gotten easier. It’s a process.

6. Denial is powerful, but acceptance is more powerful. I occasionally return to speak at the treatment center where I got sober. Once my counselor told me that I was the last person she ever expected to come back willingly based on my first month there, and definitely the last person she expected to want to stay sober. Since I was initially forced into treatment, I was in denial about having a problem. It would have been many more months, even years, before I came to that conclusion on my own. Even though deep down I knew that I did not drink like a normal person, I denied having any real problem, and that was a driving force in my inability to make any progress. It sounds cliché, but it was only once I accepted that I had a problem that I was able to move forward.

7. Sobriety leads to crossing paths with some incredible (and some not so incredible) people. I’ve met my share of both. There’s always an inexplicable bond present when I meet someone young who is also sober. While others may try to understand, they never really will. People who are sober understand on another level because they’ve been through similar struggles. While most people are kind and understanding, there are some people in sobriety who don’t want to be there and make that known. In that case, I steer clear unless I think I can say something that will click for them.

8. Complacency is dangerous. Sometimes I get lazy, and I don’t go to a meeting or write for a few weeks. I start to notice this itch creeping in, this desire to do something, anything impulsive—the same feeling I would get before a night of drinking. Staying ahead of my addiction is vital, if I want to maintain sobriety. I love the saying, “The first thing you put ahead of your sobriety will be the second thing you lose.” It’s true. Complacency is a very dangerous place to reside.

9. There’s no better high than a life you’re proud of. In my first week of sobriety, someone told me, “You won’t believe how fulfilling your life can be when you’re sober.” I doubted it. I loved getting drunk because the high allowed me to forget about everything else pressing or shameful in my life. I don’t have that problem today. It is refreshing to have nothing to hide from in my life. I’m proud of where I am and who I am, because I put a hell of a lot of work into becoming that person.

10. Sobriety will never be a regret.  I regret so many things I did while drinking. So many. But I do not regret one day of sobriety, and that’s a pretty damn good feeling.