Hollywood has long been well-known to be peppered with celebrities with different addiction–alcohol, cocaine, and heroin, to name just a few. 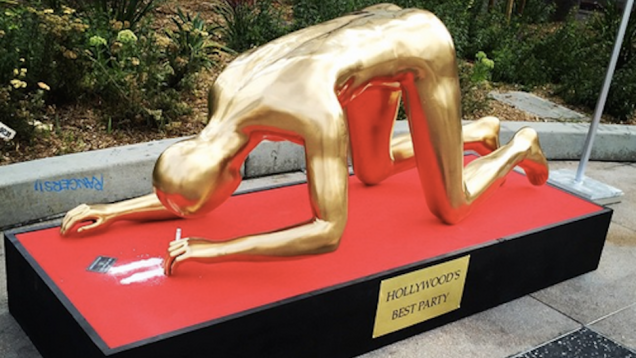 “The Oscars is a very glitzy, high-profile event, so I wanted to bring attention to cocaine use in Hollywood,” the artist told CNN in a report. “It’s part of the culture here.”

Many celebrities have died from drug-related causes, while some had brushes with the law or have broken relationships through different addictions: Heath Ledger, Whitney Houston, Robin Williams, Amy Winehouse, and Philip Seymour Hoffman are just a few of the many brilliant and talented celebrities that have succumbed to the disease.

On the bright side, there are celebrities who have emerged to become better people as they recover from addiction. Let’s take a look at some of the them and their battle–and success–against addition:

More than ten years ago, famous comedian Russell Brand was addicted to heroin, and his career is on the rise. He was told he may have only six months to live. However, a stark realization came to him at the wake the death of his friend, famous and multi Grammy-award winning singer and songwriter, Amy Winehouse. Her death spurred him to take a look at his addiction, and the whole condition of addiction. Now, he founded ‘Give It Up’ a foundation that raises awareness and money for abstinence-based recovery.

Drew grew up in a family of actors and she herself got an early start in acting. She discovered drugs at a young age. At 11, she became an alcoholic. At 12, she smoked marijuana and a year later, she was introduced to cocaine. Not long after, at 14, she attempted suicide, clear indications that her life is out of control and spiraling downwards. She came in and out of drug rehabs but eventually, she was able to turn her life around. Now, she is one of the world’s top actresses, has her own production company, and a thriving family.

Robert grew up in a household where it’s easy to get drugs. He first smoked marijuana at 6 years old. Soon, he developed addiction for cocaine and heroin, among many other drugs. He was arrested many time and his budding acting career was overshadowed by his addiction. He lost plenty of roles and opportunities. He entered drug rehab and was able to quit his habit for good. Now, he is one of the most sought-after A-list actors famous for his movie franchise Iron Man, and other films.

You may not believe this but according to her ex-boyfriend, Randolph Cook, Oprah was addicted to cocaine for many years at some point in her life. Cook alleges that the famous personality was even smoking crack cocaine during her career as a host and was even under the influence while filming her show. Although Oprah herself admitted to using cocaine, the extent of her use remains unknown. Now, she is a multi-billion dollar brand and a household name.

Stephen King is a famous writer and author whose books have been adapted to several well-known films such as Carrie, The Green Mile, Dreamcatcher, and The Shining. Stephen admitted to being addicted to alcohol and cocaine. He even confesses that in the 1980s, he was so deep into his addiction that he can’t remember writing some of his famous books at that time. He managed to get himself sober late in that decade. Although at some point he worried that losing the influence of drugs on his brain can interfere with his talent, it proved to be completely false because it was during his time of sobriety that he was able to write some of his best works.

These celebrities are real success stories that addiction can be overcome, that recovery is possible, and that life can still go on and be even better when you choose to be sober.

If you are battling with your own addictions, it’s never too late. Seek help NOW. Text or call us: